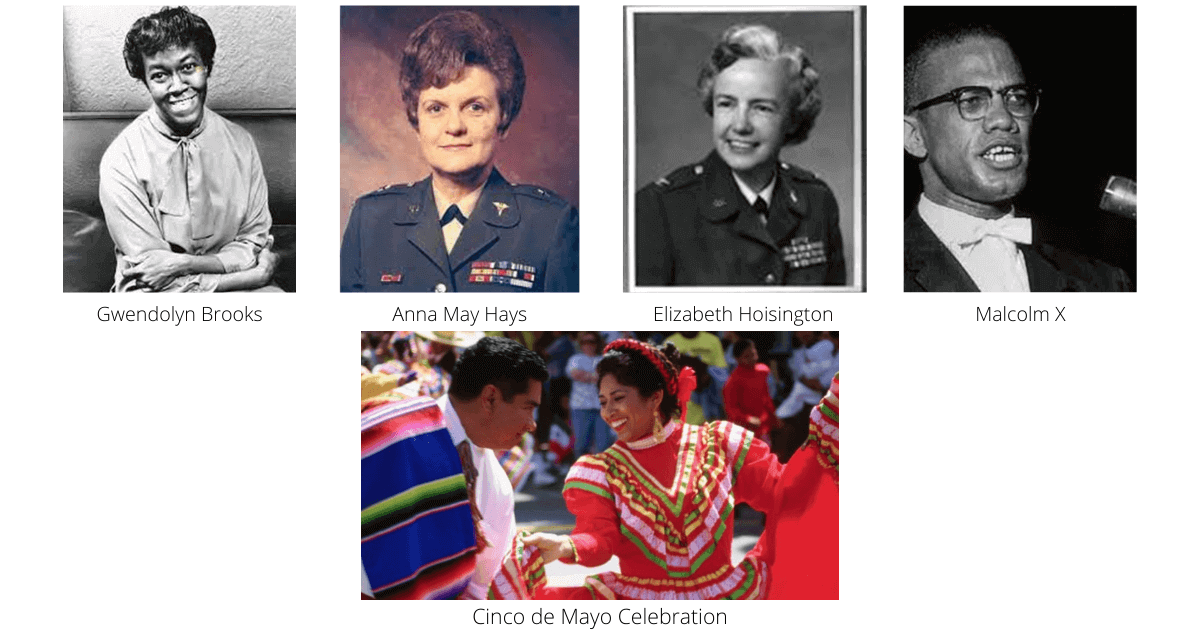 May is Asian Pacific American Heritage Month in the United States. The month of May was chosen to commemorate the immigration of the first Japanese to the United States on May 7, 1843, and to mark the anniversary of the completion of the transcontinental railroad on May 10, 1869. The majority of the workers who laid the tracks on the project were Chinese immigrants.

May is Jewish American Heritage Month, which recognizes the diverse contributions of the Jewish people to American culture.

May 2: Orthodox Easter (also called Pascha), a later Easter date than observed by many Western churches.

May 5: Cinco de Mayo, a Mexican holiday commemorating the Mexican army’s 1862 victory over France at the Battle of Puebla during the Franco-Mexican War (1861-1867). This day celebrates Mexican culture and heritage, including parades and mariachi music performances.

May 9: Laylat al-Qadr, the holiest night of the year for Muslims, is traditionally celebrated on the 27th day of Ramadan. It is known as the Night of Power and commemorates the night that the Quran was first revealed to the prophet Muhammad.

May 12, 1968: A 12-block Mother’s Day march of “welfare mothers” is held in Washington, D.C., led by Coretta Scott King accompanied by Ethel Kennedy.

May 12-13 (sundown to sundown): Eid al-Fitr, the first day of the Islamic month of Shawwal, marking the end of Ramadan. Many Muslims attend communal prayers, listen to a khutuba (sermon), and give Zakat al-Fitr (charity in the form of food) during Eid al-Fitr.

May 15, 1970: Anna Mae Hays and Elizabeth P. Hoisington officially receive their ranks as U.S. Army Generals, becoming the first women to do so.

May 16-18 (sundown to sundown): Shavuot, a Jewish holiday that has double significance. It marks the all-important wheat harvest in Israel and commemorates the anniversary of the day when God gave the Torah to the nation of Israel assembled at Mount Sinai.

May 17: International Day Against Homophobia, Transphobia and Biphobia, a global celebration of sexual-orientation and gender diversities.

May 17, 1954: The United States Supreme Court issued its decision, Brown v. Board of Education of Topeka, Kansas, prohibiting school segregation and overturning Plessy v. Ferguson the Supreme Court which gave legal backing to the concept of separate but equal public facilities for blacks.

May 19, 1925: Malcolm X, civil rights leader, was born on this day in Omaha, Nebraska. His father died when he was six years old, and his mother was committed to an insane asylum when he was 14. Although he excelled in school, he lost interest when a teacher told him that he should become a carpenter rather than a lawyer. He soon became involved in petty criminal activities and eventually was sentenced to prison. While in prison Malcolm joined the Nation of Islam and replaced his last name with X, a custom among followers as they considered their last names to be that of white slave owners. While in prison, Malcolm educated himself by spending long hours reading and memorizing a dictionary. When he was released from prison he rose up in the ranks of the Nation of Islam, establishing temples for the organization. During the major part of the Civil Rights Movement, from 1955 to 1965, Malcolm challenged Martin Luther King, Jr.’s call for integration and nonviolence and argued for Black independence, civil disobedience and defending oneself “by any means necessary.” By 1963, tensions arose between Malcom and the leader of the Nation of Islam, Elijah Muhammad, about the political direction of the Nation. Malcom traveled to Mecca in 1964 and converted to Sunni Islam, adopting the Muslim name, el-Hajj Malik el-Shabazz. He began to receive death threats from the Nation of Islam and was assassinated on February 21, 1965. His ideas and speeches contributed to the development of Black nationalism and the Black Power Movement.

May 21: World Day for Cultural Diversity for Dialogue and Development, a day set aside by the United Nations as an opportunity to deepen our understanding of the values of cultural diversity and to learn to live together in harmony.

May 21, 1932: Amelia Earhart Putnam becomes the first woman to complete a solo-transatlantic flight by flying 2,026 miles from Newfoundland to Ireland in just under 15 hours.

May 26: Buddha Day (Vesak or Visakha Puja), a Buddhist festival that marks Gautama Buddha's birth, enlightenment and death. It falls on the day of the full moon in May and it is a gazetted holiday in India.

May 30: All Saints’ Day, celebrated by many Eastern Christian churches on the first Sunday after Pentecost, in recognition of all known and unknown saints.