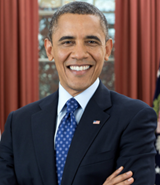 A voter turnout of historical proportions, Barack Hussein Obama, II became the 44th President of the United States of America, and the first Black American to serve as Commander in Chief on January 9, 2009. Born in Hawaii, President Obama graduated from Columbia University and worked as a community organizer in Chicago in 1983. In 1988 he enrolled in Harvard Law School and after graduating became a civil rights attorney and taught constitutional law at the University of Chicago Law School before serving in the Illinois Senate from 1997 to 2004. In 2004, he successfully ran for the U.S. Senate and served as Senator from Illinois. As United States President, he focused on LGBT rights and healthcare reform and signed many landmark bills into law including the Affordable Care Act, the Dodd-Frank Wall Street Reform and Consumer Protection Act, Don’t Ask, Don’t Tell repeal Act of 2010, and the American Recovery and Reinvestment Act of 2009 to name a few. Barack Obama now runs the Obama Foundation with his wife and former First Lady, Michelle Obama.

In 1994, the UN General Assembly declared that August 9th would be International Day of the World’s Indigenous Peoples. The UN stated that on this day, “people from around the world are encouraged to spread the UN’s message on the protection and promotion of the rights of indigenous peoples.” The focus this year is “The Role of Indigenous Women in the Preservation and Transmission of Traditional Knowledge.”

On This Day in 2007…
Sponsored by the Human Rights Campaign, the Logo cable channel hosts the first American presidential forum focusing specifically on LGBT issues, inviting each presidential candidate. Six Democrats participate in the forum, including Hillary Clinton and Barack Obama, while all Republican candidates decline.

This ancient Hindu festival is also known as Rakhi Purnima. It is celebrated on the full moon of the Hindu month 'Shravana' and commemorates the loving kinship between a brother and sister. “Raksha” means “protection” in Hindi and symbolizes the longing a sister has to be protected by her brother. During the celebration, a sister ties a string around her brother’s (or brother-figure’s) wrist and asks him to protect her. The brother usually gives the sister a gift and agrees to protect her for life.

Sometimes called “Ancestor Day” or “Ghost Festival,” this Buddhist festival is observed in many countries, including China, Japan, India, Laos, Cambodia, Thailand, and Malaysia. Celebrated across fifteen days, the festival of Ullambana is marked on a different date every year following the lunisolar calendar. The word “Ullambana” is derived from a Sanskrit word which literally means "deliverance from suffering." This festival is generally celebrated to provide salvation to the anguished souls of near and dear ones in Hell and obtain liberation for them. Offerings are made to the departed relatives to satiate their hunger - a ritual which derives from the Ullambana Sutra. This practice is said to have originated with offerings made by the Arhat Mahāmaudgalyāyana when he realized through his magical powers that his mother had been reborn as a hungry ghost.

Similar to Ullambana, Oban is a Japanese Buddhist festival and custom for honoring the spirits of ancestors. Also known as “Bon,” Oban began as a Buddhist custom but has evolved into a holiday in which families hold reunions and visit their ancestral homes. The name of the festival loosely translates to “Festival of the Dead,” and is celebrated on different dates in different regions depending on whether the lunar or solar calendar is being observed. In Japan, Obon is celebrated from the 13th to the 15th day of the seventh lunar month.

Celebrated by an estimated 930 million people all around the world, Janmashtami is an annual Hindu religious festival that celebrates the birth of Lord Krishna. According to the Hindu calendar, it is observed on the Ashtami Tithi of Krishna Paksha - the eighth day of the Hindu lunar calendar. This is an important festival in Hinduism. Krishna Janmashtami has great significance in Mathura and Vrindavan. It is said that Lord Krishna was born in Mathura and spent his childhood in both Mathura and Vrindavan. Devotees also perform fast on this auspicious day.

James Stone of Ohio enlisted to become the first black to fight for the Union during the Civil War. He was very light skinned and was married to a white woman. His racial identity was revealed after his death in 1862.

American Actress, Author, and Activist, Marlee Matlin lost all hearing in her right ear and 80% of the hearing in her left ear at the age of 18 months due to illness and fevers. Marlee Matlin has had decades of success in the entertainment industry, receiving worldwide critical acclaim for her film debut in Paramount Pictures' Children of a Lesser God (1986) for which she won the Academy Award for Best Actress. Her victory is especially notable as she became not only the youngest person to win in that category, but also the first hearing-impaired person to win an Oscar.

A day of celebration commemorating the August 26, 1920, certification of the 19th Amendment to the U.S. Constitution that gave women the right to vote. Congresswoman Bella Abzug first introduced a proclamation for Women’s Equality Day in 1971. Since that time, every president has published a proclamation recognizing August 26th as Women’s Equality Day.

Emmettt Till was a 14-year-old African American teenager whose murder catalyzed the emerging civil rights movement. Till was born to working-class parents on the South Side of Chicago. When he was barely 14 years old, Till took a trip to rural Mississippi to spend the summer with relatives. He was staying with his Uncle, Moses Wright, and his family. He had been warned by his mother (who knew him to be a jokester accustomed to being the center of attention) that whites in the South could react violently to behavior that was tolerated in the North. This animosity was exacerbated by the U.S. Supreme Court’s 1954 decision in Brown v. Board of Education of Topeka, which overturned the “separate but equal” doctrine established in Plessy v. Ferguson (1896) that allowed racial segregation in public facilities.

On August 24, 1955, only 3 days after he arrived at his uncle’s home, Till and a group of other teens went to a local grocery store after a day of working in the fields. Accounts of what transpired thereafter vary. It is reported that the other teens dared Till to ask the story clerk, a white woman, for a date. He went in the store, bought some candy, and on the way out was heard saying, “Bye, baby” to the woman. There were no witnesses in the store, but Carolyn Bryant—the woman behind the counter—later claimed that he grabbed her, made lewd advances, and wolf-whistled at her as he sauntered out.

In the early morning hours of August 28, 1955, Roy Bryant, the cashier’s husband, and J.W. Milam, Bryant’s half-brother, forced their way into Wright’s home and abducted Till at gunpoint. Bryant and Milam severely beat Till, gouging out one of his eyes. They then took him to the banks of the Tallahatchie River, where they killed him with a single gunshot to the head. The two men tied the teen’s body to a large metal fan with a length of barbed wire before dumping the corpse into the river.

Three days later, Emmett Till’s corpse was recovered, but was so disfigured that Moses Wright could only identify it by an initialed ring. Authorities wanted to bury the body quickly, but Till’s mother, Mamie Bradley, requested it be sent back to Chicago. After seeing the mutilated remains, she decided to have an open-casket funeral so that all the world could see what racist murderers had done to her only son. Jet, an African American weekly magazine, published a photo of Emmett’s corpse, and soon the mainstream media picked up on the story.

Bryant and Milam were arrested, and their trial began on September 19, 1955. The defendants were allowed to sit with their families, bouncing toddlers on their lap while testimony was being given. After four days of testimony and a little more than an hour of deliberation, an all-white, all-male jury acquitted Bryant and Milam of all charges (at the time, Blacks and women were not allowed to serve as jurors in Mississippi). Protected from further prosecution by double jeopardy statutes, the pair was paid for the story and interviewed by their lawyer and a journalist in a 1956 article for Look magazine in which they admitted the circumstances of Till’s kidnapping and murder.

The March on Washington was a massive protest march that occurred when some 250,000 people gathered in front of the Lincoln Memorial in Washington, D.C. It is also known as the March on Washington for Jobs and Freedom. A. Philip Randolph, an elder statesman of the civil rights movement, was instrumental in organizing this march, as he was with a previous march on Washington in May of 1957. In the wake of violent attacks on the civil rights demonstrators in Birmingham, Alabama in 1963, Randolph, who was planning a march for jobs, worked together with Martin Luther King, Jr., who was planning a march for freedom.

The March on Washington aimed to draw attention to continuing challenges and inequalities faced by African Americans a century after emancipation. President John F. Kennedy met with civil rights leaders and tried to discourage the march from going forward suggesting that it was “ill-timed,” to which King replied, “Frankly, I have never engaged in any direct-action movement which did not seem ill-timed.” JFK reluctantly endorsed the March on Washington. It is interesting, in light of the January 6, 2021 uprising, that civil rights leaders decided to end the march at the Lincoln Memorial instead of the Capitol, so as not to make members of Congress feel as if they were under siege. It was at this march that Martin Luther King Jr. presented his now now-iconic “I Have a Dream” speech.

Guion “Guy” S. Bluford, Jr. became the first black American astronaut to make a space flight on board the space shuttle Challenger after graduating from Penn State in 1964 with a B.S. in aerospace engineering.